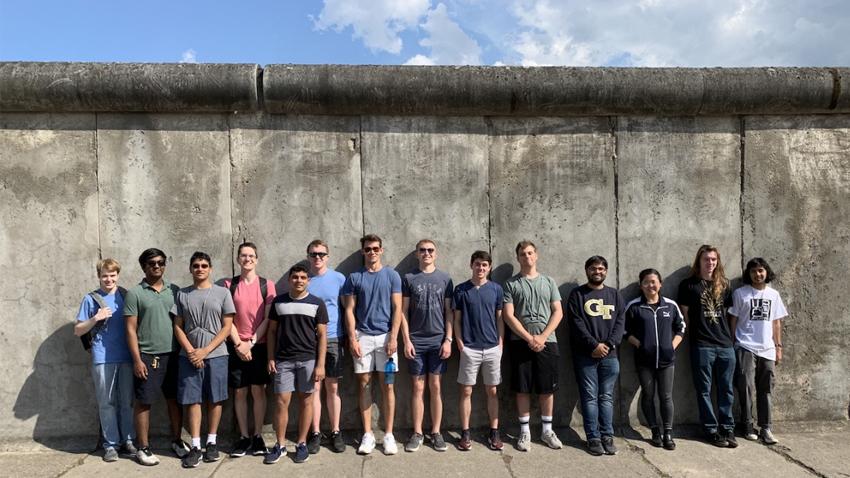 Berlin is the largest city in Germany and a hub for all of Europe in research, culture, media, and technology. The city was famously divided in two during the Cold War, and since its reunification in 1989 has become equally famous for its youthful population and its diverse, tolerant culture. The city has both a rich artistic heritage and a vibrant start-up scene – a great place to spend a summer!

For more information and an overview of the program, please check out our digital flyer.

“Having small class sizes allowed for much greater communication and I always felt like the professors were looking out for the students. They made sure we were taking full advantage of living abroad and not just drowning in course work.”

“I recommend this program because of the combination of location and classes. Berlin has so many things to do and so many things to see. The classes offered are mostly classes everyone needs to take for their major. And I loved the street food-- I ate at Curry 36 almost every day!”

“The best part about living in Berlin was immersing myself in the culture. It was great to participate almost as a local and try out the different foods and areas of the city that a tourist might not see. You just can’t get that on a vacation.”

Berlin is the largest city in Germany, and is an economic, high-tech, and cultural hub for the whole of Europe. The city is probably best known for the famous Berlin Wall, which divided the communist East from the capitalist West during the Cold War. These days, the city is not only reunited, but also a hub for high-tech enterprise, including not only computing but also pharmaceuticals and biotechnology.

The city was founded in the 13th century at the crossing of two important trade routes, and it remains a place where different cultures meet and merge. The city is home to residents from more than 190 countries. Berlin is the capital of the Federal Republic of Germany, and home to its parliament, called the Bundestag.

Berlin is the only city in the world with three opera houses. The city also houses more than 130 museums and more than 400 art galleries, as well as the world’s oldest large-scale movie studio complex. The Berlin International Film Festival is the largest in the world. And about 20 news agencies and more than 30,000 creative companies are located in Berlin, making it a major capital of culture stretching from the high art of the Renaissance to tomorrow’s industrial designs.

Getting to Berlin is easy, as the city is a major European air and rail hub. Once you arrive, you can use the city’s superb public transit, which includes trains, trams, buses and ferries-- make sure you have a map! Walking through the city is a striking experience, because so many historical periods are represented, stretching from a few remaining medieval buildings near Alexander Platz to the steel-and-glass towers at Potsdamer Platz.

Berlin has a younger population than most European cities, and is known as a place where people constantly produce new ideas-- in research, in commerce, and in art.