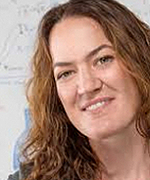 Deirdre Shoemaker, Dunn Family Professor of Physics, conducts  research  in gravitational wave astronomy and computational astrophysics.  She is a member of the LIGO Scientific Collaboration and the NASA LISA Study Team. She won the NSF Career award and is a fellow of the American Physical Society. She received her B.S. in Astronomy and Astrophysics with honors and Physics form Penn State in 1994 and her PhD in Physics from the University of Texas at Austin in 1999.  She was a postdoctoral fellow at Penn State and Cornell University before joining the faculty at Penn State in 2004.  She moved to the School of Physics at Georgia Tech in 2008 and is an adjunct  Professor of the School of Computational Science and Engineering.   She is one of the founding members of the Center for Relativistic Astrophysics  and its Director.   In 2017, Deirdre took on the role of Associate Director for Research and Strategic Initiatives for the Institute for Data Engineering and Science.