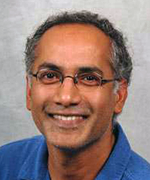 Regents' Professor, Joint with the School of Math; ACO Director

Prasad Tetali holds a professor position in the schools of mathematics and computer science at Georgia Tech. Most recently, he served as the Interim Chair of the School during April 2015-December 2016.

He got his Ph.D. from the Courant Institute of Mathematical Sciences (NYU) in 1991.  Following a postdoctoral study as a Member of Technical Staff at AT&T Bell Labs in Murray Hill (NJ), he joined Georgia Tech in 1994.  He has published more than 100 research papers, gave numerous invited lectures, advised 9 Ph.D. students, and mentored 9 postdoctoral fellows and numerous undergraduate students.  Tetali served as the Editor-in-Chief of the SIAM Journal of Discrete Mathematics (2009-2011), and as the Director of Georgia Tech's interdisciplinary research Think Tank, Algorithms & Randomness Center (ARC) during 2011-2014. He is recognized as an inaugural SIAM Fellow (2009) and an inaugural AMS Fellow (2012). He is appointed as a Regents' Professor at Georgia Tech in October 2017.