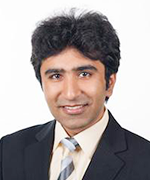 Dr. Krishna's research spans the computing stack: from circuits/physical design to microarchitecture to system software. His key focus has been in architecting the communication networks and protocols between homogeneous/heterogeneous/reconfigurable computer systems, both on-chip and off-chip. He has over a dozen publications in leading computer architecture and EDA conferences and journals and holds one patent.