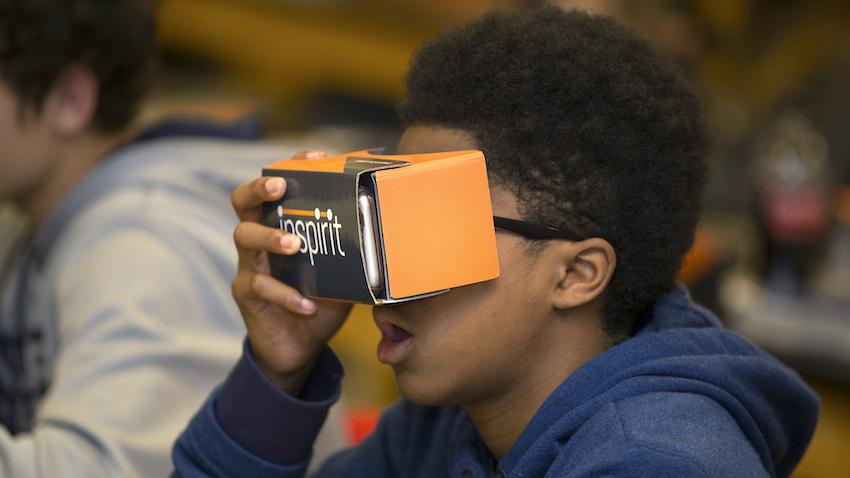 VR Taking Students Where Once Only the Magic School Bus Could

A Georgia Tech undergraduate research team is taking local high school and middle school students where they’ve never been before – inside of plant and animal cells.

The content was used for a recent study with students in Cobb County, Georgia, to determine the effectiveness of the new technology in the classroom. According to the research team, it may be the largest study of its kind.

Nearly 350 high school and middle school students participated in the study, which was approved by Georgia Tech’s Institutional Review Board. The data-gathering portion of the study ended April 9. Although the analysis is not complete, initial results indicate that VR is likely to have positive educational outcomes for students.

For the study, the team worked with Georgia Tech’s Center for Integrating Science, Mathematics and Computing (CEISMC) and teachers from the Georgia Department of Education for more than a year to co-design and develop the VR video content based on the state of Georgia’s curriculum standards.

“We held design workshops with different groups of teachers, students, parents, and others from across the state with the goal of designing the curriculum using guidelines and recommendations they gave us,” said team leader Vishwanath.

The team collaborated with teachers to create scripts based on AP content, which were then storyboarded and animated for the videos.

Not unlike the 1990s children’s show, The Magic School Bus, the 360-degree VR videos take students “inside” of a cell for up-close exploration. Once inside, a voiceover describes what students are seeing and how the different parts of the cell function. The series of VR videos cover topics including mitochondria, lysosomes, DNA, RNA, and protein synthesis.

"This is a unique chance for students to experience a cell from the inside," said Kristy Younker, a science teacher at Kennesaw Mountain High School taking part in the study. "Because they are already so comfortable with their cellphones, this technology may help students engage more with the subject matter."

Students participating in the study were divided into two groups – one engaging with the 360-degree VR content, the other serving as a control group.

Following normal course instruction for all of the students, the study group – using inexpensive easy-to-use cardboard VR viewers – watched a corresponding VR video for 10-15 minutes each day at the end of class. Students in the control group were asked to read from a textbook that provided the same content, but in written form with images and other illustrations.

"If you keep asking questions, you'll keep getting answers"

“We wanted to demonstrate how affordable this is. The only other technology needed is an internet connection and a smartphone, which most of the students already have,” said Vishwanath.

“We don’t believe that this technology will replace traditional instruction, but we think it may reinforce learning and empower students to ask deeper, more meaningful questions.”

Vishwanath believes the study may be the largest field study of its kind.

[PHOTOS: See all of the pictures from Kennesaw Mountain H.S.]

The team will wrap up the data analysis in the coming months and then submit the results for peer review. The team has also started up an entrepreneurial initiative to further explore the potential that VR could have for formal and informal learning in more global, underserved contexts.

Vishwanath is heading to Stanford University this fall to begin his Ph.D. in the Graduate School of Education’s Learning Sciences and Technology Design program. He is also a recent recipient of the prestigious Knight-Hennessy scholarship.