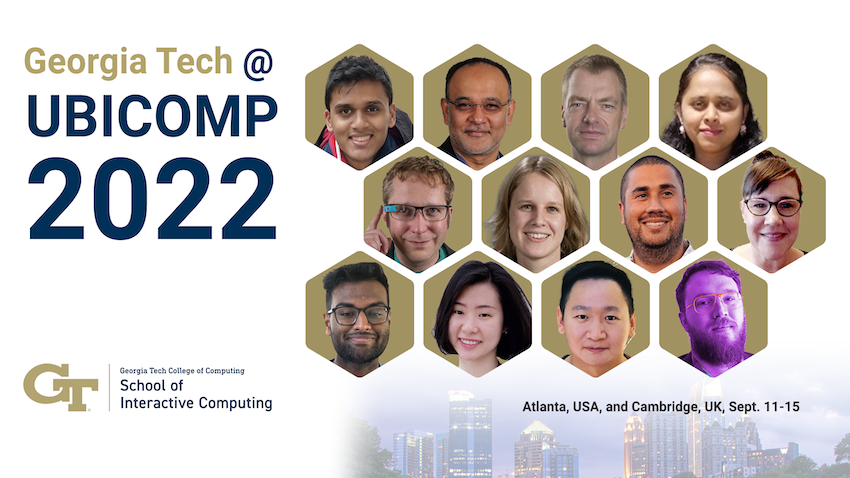 Georgia Tech Taking Ubicomp Conference Back to its Academic Roots

Since its inception in 1999, Ubicomp has grown into the premiere conference in the field of ubiquitous and wearable computing. In recent years, before the Covid-19 pandemic forced the conference to become virtual, Ubicomp was held in destination locations such as Maui, Hawaii and Osaka, Japan. In 2020, the conference was slated to be held in Cancun, Mexico, but the pandemic forced organizers to pivot.

After two years of meeting virtually, organizers were ready for Ubicomp to be in-person once again, but the venue in Cancun wasn’t available for 2022. They also weren’t sure if the pandemic would force them to shut down a live conference, so booking another venue proved to be a financial risk.

The solution: bring Ubicomp back to its roots. In the conference’s early days, it was small enough to be hosted by universities. This year, it’s being hosted by two of them at separate locations — Georgia Tech in Atlanta and Cambridge in the United Kingdom.

“Ubicomp started with around 150 people, I think, and eventually grew and grew,” said School of Interactive Computing professor and Ubicomp local arrangement chair Thad Starner. “It’s an 800-person conference, so that suddenly means you must plan for hundreds of thousands of dollars of resources, and you’re taking out major venues like hotel ballrooms, that sort of thing. Now it’s gone back to our roots of doing it with academic resources and trying to make it a more intimate event.”

Ubicomp will he held on the campuses of Georgia Tech and Cambridge simultaneously, with online options available, from Sept. 11 to Sept. 15. More than 175 papers will be presented by more than 800 computer scientists, with each presentation available online through streaming, cross-presented from the Atlanta venue to the Cambridge venue.

Anyone attending in Atlanta can see a presentation being given in Cambridge in real time and vice versa. The live presentations in Atlanta will be held on the first floor of the Technology Square Research Building in Midtown.

“We leveraged our resources here at TSRB because our auditorium and banquet hall has just been renovated, so we’ll be the first conference there,” Starner said. “That made the cost of the conference go down dramatically.”

Planning the event has had its share of challenges — the biggest one being the coordination of simultaneous presentations happening at two different locations across the world, but Starner said he’s found the new design to be convenient for participants in ways the conference hadn’t been in previous years.

Starner added that the organizing committee will pay attention to this year’s event, and if the dual locations seem to work well, it’s a feature that may not go away anytime soon. Traditionally, the locations are selected on a rotation of choosing cities from Asia, Europe and North America.

“This idea that maybe we’re going to have three sites, one in Asia, one in Europe and then one in North America, and then people go to whichever one they care about, it may be a new model,” he said. “We don’t know. It’s the first time somebody has tried this. This is a potential model for the future and is something that’s being talked about right now.”

Thomas Ploetz, associate professor at the School of Interactive Computing, is representing Georgia Tech as the general chair for this year’s Ubicomp. He has authored or co-authored eight papers that will be presented this year and is one of six IC faculty members who have had papers accepted. The others are professor emeritus Gregory Abowd, assistant professor Sonia Chernova, interim school chair Betsy DiSalvo, associate professor Josiah Hester, and distinguished professor Irfan Essa. The papers are also co-authored by 12 Georgia Tech PhD or graduate students. Tech faculty and students contributed to 13 papers altogether.

Ploetz said any papers presented at Ubicomp were accepted because they were published in a journal called The Proceedings of the ACM on Interactive, Mobile, Wearable and Ubiquitous Technologies (IMWUT) during the previous year. Many researchers in the field refer to Ubicomp and IMWUT synonymously, he said.

“It is fantastic to have such a strong presence of GT researchers — first and foremost our students — at our annual flagship conference,” Ploetz said. “It underlines the strength of Ubicomp/IMWUT research at our university.”

Starner said it’s an exciting time in the ubiquitous computing field, and the ability to meet in person for the conference couldn’t have come at a better time.

“Right now, all the wearable stuff, this stuff used to be esoteric. Nobody knew about any of this stuff. Now it’s part of our daily lives, and there’s so much capability now that we didn’t have 20 years ago. After the last few years, what we’re going to see is a lot more collaboration and the vision of the future for the field.”

Clustering of Human Activities from Wearables by Adopting Nearest Neighbors

Reading the Room – Automated, Momentary Assessment of Student Engagement in the Classroom: Are we There Yet?