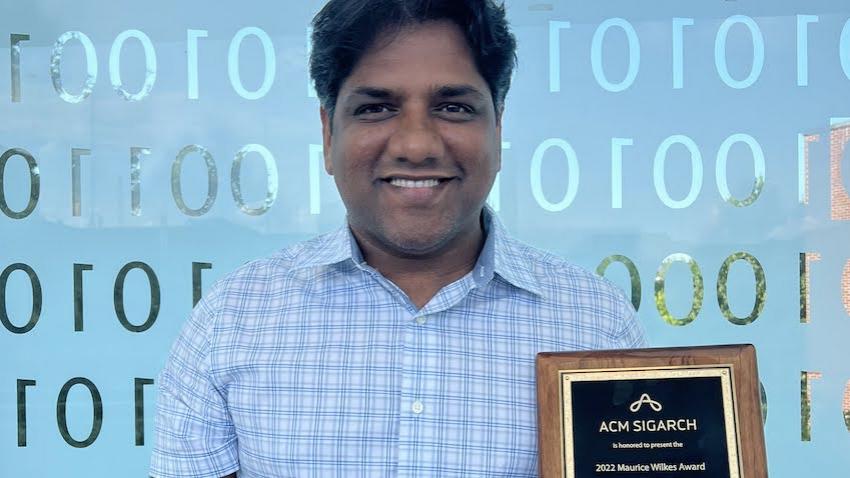 The annual award, which includes a $2,500 cash prize, is one of the most prestigious mid-career awards in computer architecture and recognizes contributions to the community. Qureshi earned this year’s distinction for work he’s done to advance high- performance memory systems since earning his Ph.D. in 2007.

“This is a wonderful and much deserved honor - my heartiest congratulations,” said Babak Falsafi, EPFL computer science professor and SIGARCH chair.

The announcement was made during an award luncheon during ISCA'22: The 49th International Symposium on Computer Architecture, which was held in New York City this summer.

“And if the community recognizes the work, that’s the cherry on top,” said Qureshi during remarks at the event.

The award is named after Maurice V. Wilkes, a British computer scientist and a Turing Award winner. Wilkes is widely considered as the father of microprogramming and played a pivotal role in the electronic delay storage automatic calculator, which started operating in 1949.

Qureshi's research has impacted many design aspects of high-performance memory systems according to School of Computer Science Chair Vivek Sarkar.

“Moin's selection for this award clearly demonstrates the leadership impact of his research career thus far and reflects positively on both his accomplishments and on Georgia Tech.

“His highly cited publications have become household names in the computer architecture community and continue to have a major impact on subsequent research and product development,” said Sarkar, who is also the Stephen Fleming Chair for Telecommunications in the College of Computing.

He took a new approach to the design and configuration of memory caches by introducing novel policies. These policies placed larger caches at the outermost level of the cache hierarchy relative to smaller caches placed at the innermost level. This new approach ultimately influenced how cache architectures for 3D memory systems are developed.

Qureshi’s work has also influenced the evolution of NVM and the design of future hybrid memory systems. His research demonstrated that phase-change memory can be combined with standard dynamic random-access memory to create a hybrid system that delivers the benefits of both memory types. This breakthrough allowed for cost-effective and power-efficient increases in memory capacity.

“We are all proud of this achievement and can already see signs of influential impact of his more recent research in computer architecture, including in the field of quantum computing,” said Sarkar.

Qureshi, who holds nearly two dozen patents, began his career as a research staff member at the IBM T.J. Watson Research Center, where he developed the caching algorithms for Power-7 processors.

He earned best paper award in 2018 at  IEEE/ACM International Symposium on Microarchitecture,. Qureshi won a 2019 Persistent Impact Prize for his ISCA 2009 paper on phase-change memory and 2021 Persistent Impact Prize for his MICRO 2009 paper on PCM wear leveling, both recognized for “exceptional impact on the fields of study related to non-volatile memories.”

Along with his research, Qureshi is contributing to the field by developing the next generation of researchers, with several of his Ph.D. students placed at top academic places, including at UIUC, University of Wisconsin, University of British Columbia, and University of Toronto.

He is the director of the Memory Systems Lab, which designs and develops future computing systems. Current work in the lab focuses on quantum computing, secure hardware, and robust artificial intelligence.