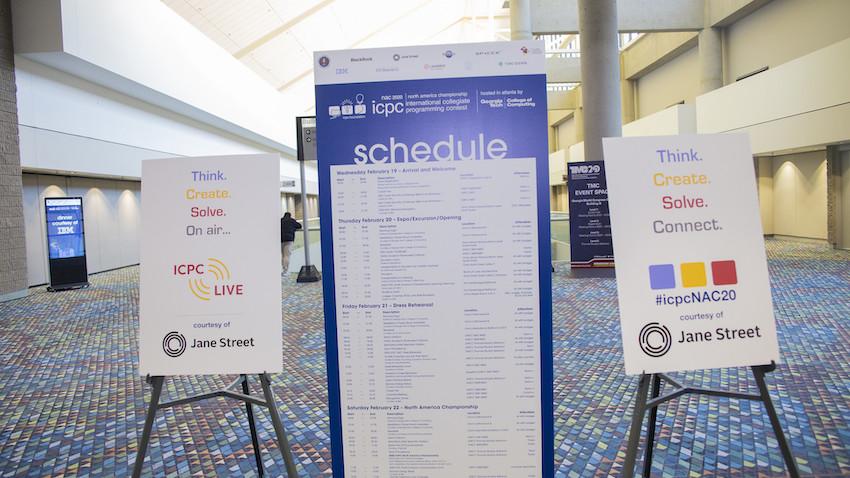 With the city’s booming technology sector as the backdrop, more than 150 top collegiate computing students are heading to Atlanta to compete in one of the most highly regarded – and most challenging – global programming competitions.

International Collegiate Programming Contest (ICPC) regional winners from the United States and Canada will be in Atlanta next month for the inaugural ICPC North America Championship (NAC). ICPC is an annual algorithmic programming competition for university students around the world.

Georgia Tech’s College of Computing, which is ranked nationally and globally as a top-ten computing program, is the official host for the competition, which is set for Feb. 19-23 at the Georgia World Congress Center.

“We are tremendously honored that the ICPC selected the College to host its inaugural North America Championship,” said College of Computing Dean Charles Isbell.

“ICPC attracts a diverse pool of very talented computing undergraduates, so we are thrilled to have an opportunity to showcase GT Computing’s academic programs and research initiatives.”

“The ICPC is a global community of universities and volunteers who come together to provide an opportunity for students of computing to develop excellence in problem-solving,” said Deputy ICPC Executive Director Jeff Donahoo, who is also a computer science professor at Baylor University.

“It is only fitting that our first NAC is being hosted by the Georgia Tech College of Computing, an institution known globally for excellence in research and education.”

The 55 regional teams from the United States and Canada competing in the 2020 ICPC NAC – each with three students and a coach – will vie for six challenge medals, rankings, and the chance to be the inaugural ICPC North America Champions.

Students, coaches, and others wanting to keep up with developments or share their experiences can use the hashtag #icpcNAC20 for the event.

The winning team, along with 2019 regional winners, will advance to the 2020 ICPC World Finals in Moscow. Teams winning a wildcard or one of six challenge medals will also move on to the finals, scheduled for June 21-26.

The ICPC is the oldest, largest, and most prestigious programming contest in the world. The ICPC operates under the auspices of the ICPC Foundation, which was founded to advance the art and sport of competitive programming for the benefit of society. More than 320,000 students have competed in ICPC since it began in 1970. In 2018, nearly 53,000 students from more than 3,200 universities in 110 countries participated in ICPC events.