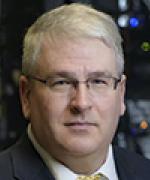 Michael Bailey joined the School of Cybersecurity and Privacy on June 1, 2022 as Founding Chair. Before joining Georgia Tech, Bailey previously served as a Professor in the Department of Electrical and Computer Engineering at University of Illinois at Urbana-Champaign. His research focused on the performance and security of complex distributed systems, and he is the author of 90+ scholarly publications in these areas. Prior to his appointment at the University of Illinois, he was a Research Associate Professor in the Computer Science and Engineering Division of the University of Michigan’s College of Engineering. His industry experience includes employment at Amoco Corporation, Andersen Consulting, and three startup companies, including a role as the Director of Engineering at Arbor Networks. At Arbor, Dr. Bailey managed a team of over 30 engineers whose software protected 70% of the entire Internet’s transit traffic against DDoS attacks. Dr. Bailey is both a senior member of IEEE and of ACM.

School of Cybersecurity and Privacy
Office of the Dean