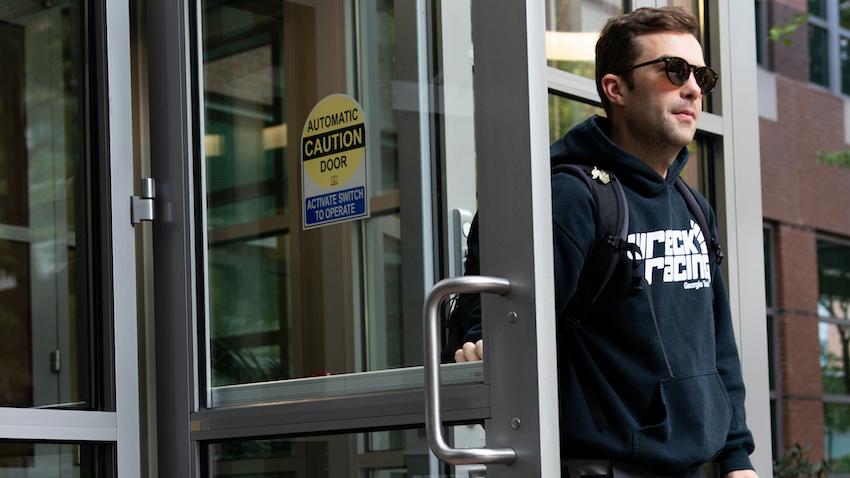 Whether through simple motions such as opening a door or through strenuous activities such as a 10-mile morning run, human beings create energy every day. Josiah Hester, associate professor and director of the Ka Moamoa Lab at Georgia Tech, believes that energy, which most people aren’t aware is around them, could be an untapped resource.

What if opening the door to a basement nine times could produce enough energy for the door to open itself on the tenth time when someone has their hands full? Automatic doors have been invaluable in providing convenience for those who have difficulty opening doors, but the problem with them, and other automated objects, is they are powered by complex wiring systems or batteries with short lifespans. These systems are expensive, waste energy when not in use, and require constant maintenance and battery replacement, Hester said.

Working with Yang Zhang, assistant professor in electrical and computer engineering at the University of California, Los Angeles, Hester said he’s starting to lay the groundwork toward solving the problem of the inefficiency of automatic systems through devices called Minikers.

The energy produced by many people manually opening a door to a public building would be more than enough to power the automatic function when the need for the door to be automatically opened arises, he said. And instead of a battery, the door would be operated by a Miniker, which contains a custom driver circuit that enables motor mechanisms to switch between manual and automatic operation, and a capacitor for energy storage.

“You pull the door open, which makes the motor turn, and then we convert the motion of the motor into electrical energy, which we can store for later.” Hester said. “It’s momentarily stored in these capacitors, which are two small metal plates that hold a charge between them. Unlike a battery, there is no chemical reaction, or protective circuitry, so they can be charged and discharged virtually infinitely.”

Hester and Zhang recently received a $550,000 grant from the National Science Foundation to fund research and development of Minikers and other interaction-powered devices. These devices could potentially revolutionize the smart home environment and make smart home technology more cost effective and energy efficient. Hester co-authored a paper on the subject, “Minikers: Interaction-Powered Smart Environment Automation,” which was an official selection at the 2022 Ubicomp conference held at Georgia Tech in September.

“You’re not going to be able to power the refrigerator, unfortunately, but keeping a light on for many days, that’s totally feasible,” Hester said. “You could have a door connected to a light outside, and every time you opened it, the light comes on. It’s not a lot, but it’s enough to do some tasks that can be helpful in the smart home context.”

Through his Ka Moamoa Lab, Hester focuses on ubiquitous and wearable technology that is eco-friendly, environmentally sustainable, and is either battery-free or greatly reduces the need for a battery.

Harvesting the energy that humans produce every day through daily activities can only go so far, and once that energy is stored in a Miniker, it quickly begins to dissipate.

Hester said his work focuses on bridging this gap by “making computing and sensing more energy-efficient, energy-aware, and contextual.”

In the same manner as Minikers, Hester believes wearable technology such as a smart watch or Fitbit, could temporarily operate through the motion of the person wearing these devices.

“When a wearer is moving and active, that is often when they want to collect FitBit type of data,” Hester said.

“Having a device that harvests energy from your body motion could let you track important health metrics like blood pressure and heart rate and never have to worry about plugging the wearable into the wall to charge. Every five steps you might generate enough energy to get one heart rate reading, which might be enough to be useful.”

It may not seem like much, but every time a device can use an alternate source of energy besides a battery or power grid, it’s good for the environment, saves money in the long run, and allows the device to last longer, Hester said.

Hester knows his work is just the tip of the iceberg, and there are many problems that still need to be solved to make Minikers an efficient and trustworthy alternate source of power. The next thing he wants to tackle is to determine whether an individual Miniker needs to be designed to fit a specific function, or if there can be a one-size-fits all version.