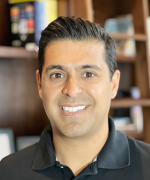 Anil Chawla is a technology entrepreneur and executive based in Durham, North Carolina. Anil most recently founded ArchiveSocial, the #1 provider of software to archive and produce legal records of social media content. Under his leadership as the company’s founding CEO, ArchiveSocial grew from niche startup idea to 70 employees, 2500 customers, and eight-figure annual recurring revenues. In 2017, ArchiveSocial collaborated with the Obama White House to produce the first-ever public archive of presidential social media. The company subsequently archived the social media of the Trump presidency as official presidential record, and continues to service the Executive Office of the President and US National Archives today.

ArchiveSocial was acquired in 2019 and Anil now serves as the company's Executive Chairman. When not immersing himself in technology and entrepreneurship, Anil enjoys competing in tennis, learning how to play musical instruments, and endlessly chasing around his two little boys. He proudly received his Bachelor’s degree in Computer Science from Georgia Tech.