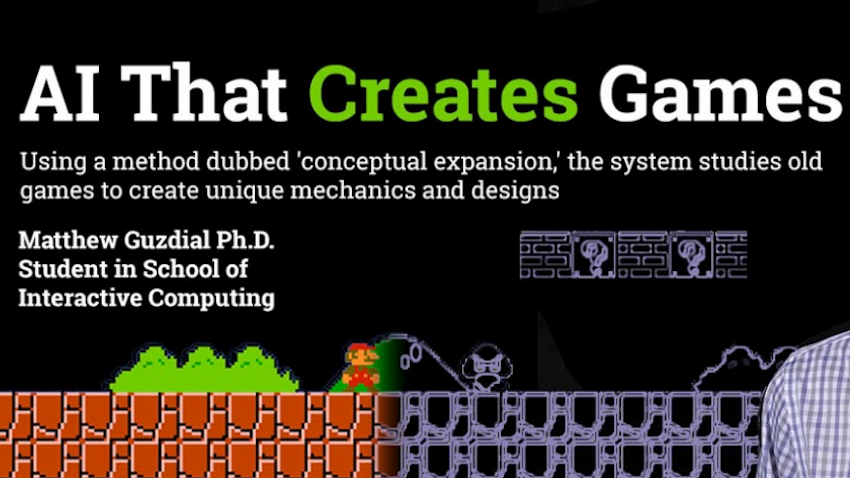 The first machine learning-based automated game design tool from a team of researchers at Georgia Tech could empower anyone to make their own games. Utilizing what the researchers dub “conceptual expansion,” the method recombines machine-learned models of games into new, playable games.

Prior automated game design approaches have used hand-authored or crowd-sourced knowledge, which requires a human author to write instructions for the system to produce games. This approach, however, limits the scope and applications of such systems, according to the Georgia Tech team.

Conceptual expansion, on the other hand, takes in an arbitrary number of games – Super Mario Bros., Kirby’s Adventure, and Mega Man, for example – and then outputs original games with unique mechanics and level designs.

“By having this done using machine learning, it doesn’t require me or anyone else to author additional content,” said Matthew Guzdial, a Ph.D. student in Georgia Tech’s School of Interactive Computing (IC) and the lead on the project. “I can just give it a new game to learn on, and it will immediately change its output based on what it sees. If I want a game like Pong and game like Tetris, I show two videos to the system and, bam, here are 30 games or however many it comes up with.”

This research builds on previous work by the team, which includes Guzdial’s adviser, IC Associate Professor Mark Riedl. That work attempted to empower artificial intelligence (AI) with creativity through the use of video games. Past iterations have looked at learning level design for a game – Super Mario Bros., for example – but this led to output levels very similar to those already in the game.

In an alternative method, the researchers drew on an approach called conceptual blending that allowed them to create entirely new types of levels, like underwater castles, which aren’t present in the original franchise.

“What we have to do now is define some way for the AI to know what is good and what is bad,” he said. “That’s the trick. We haven’t quite figured it out yet. We’ve gotten some bad stuff out, too.”

Some examples: An enemy was invented that couldn’t move and couldn’t die and a power-up that moved further away any time a player was within a certain distance.

“So, those aren’t great,” Guzdial said. “There’s no intentionality there. It’s frustrating, but it’s interesting to see how it builds these new relationships. At the end of the day, right now, we are looking for something new and something playable. Have I ever seen this before, and can I actually play this game?”

The goal, Guzdial said, is not to replace human game designers but to provide non-game designers with the ability to produce original content on their own. He’s often heard others describe games as being a combination of multiple games they’ve played before.

“Why not empower them with the ability to create on their own?” he said. “I have no illusions about whether experts can make a better game than this engine, obviously. But can we let people who don’t know how to make games become developers on their own?”

This research is published in a paper titled Automated Game Design via Conceptual Expansion, which will be presented at the 14th AAAI Conference on Artificial Intelligence and Interactive Digital Entertainment on Nov. 13-17 in Edmonton, Alberta, Canada.