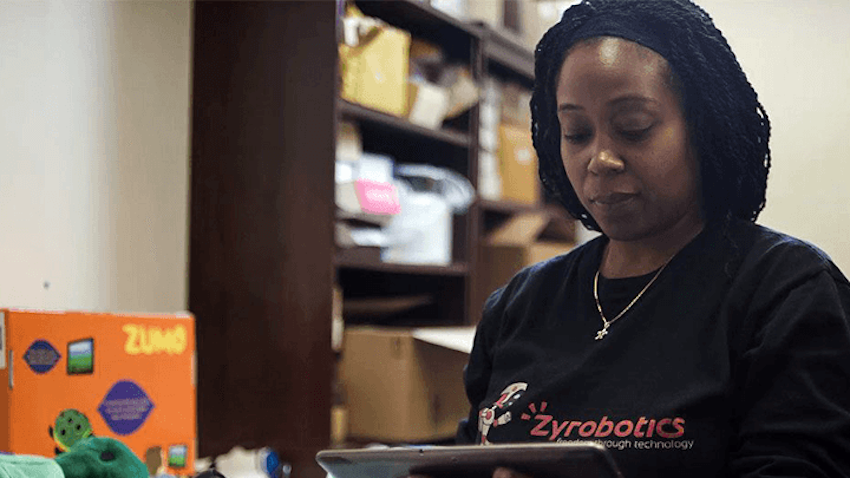 Ayanna Howard was not thinking about starting a business. Working as a professor in Georgia Tech’s School of Electrical and Computer Engineering (ECE) in 2013, her focus was on her research into assistive robotics and therapy gaming applications for children, not launching a startup outside of her lab.

Doing research in an environment like Georgia Tech’s, however, where entrepreneurship and risk-taking is not only encouraged but required, has a way of making even the clearest of plans veer off in varying unforeseen directions. Thus, out of her lab came Zyrobotics, a technology company that develops educational technologies for children with differing abilities.

For the past six years, Zyrobotics has developed personalized technologies that stimulate social, cognitive, and motor skill development using fun and educational applications. Now, there are five products, three hardware and two software. The software comprises about 15 different programs in math, robot, and coding education. There have been over 600,000 downloads and about 80 distributors using or distributing the products in clinics and school systems.

“As researchers, we’re not only concerned with development,” said Howard, now the Chair of Georgia Tech’s School of Interactive Computing (IC). “We want to know the impact. What Zyrobotics has done is allowed the research we were doing in the lab to touch so many more people than we otherwise would have done.”

A proof of concept

It started as the work of one of her graduate students in ECE. Hae Won Park was finishing up her Ph.D. when she came to a bit of a crossroads. Trying to decide whether to pursue a career in academia or to, perhaps, go into industry, she looked to Howard for some guidance.

“There was an opportunity with the National Science Foundation I-Corps grant where you have to write a proposal, put your ideas down, defend to a program manager, et cetera,” Howard said. “It seemed like a good program that would allow her to experience all of these aspects in a low-risk way. If it didn’t work out, oh well.”

Park’s research examined methods for utilizing touchscreen interfaces for accessible human-robot interaction. It was a project called TabAccess, an assistive technology that provides alternative switch inputs to control smartphones and tablets for users with motor impairments.

VIDEO: How does TabAccess work?

Throughout the course of customer discovery, where Park and Howard spoke with varying professionals and potential users, Howard said she realized just how big of a difference the technology could make outside of the lab.

“A year later, it was enough of a concept,” Howard said. “It looked like we could design something that made sense. The company was founded, and then it went off and did its own thing.”

It was the impact that led Howard to push forward on the project as a startup. At the time, she had been doing robotics educational STEM camps focused on children with special needs. Students, who had primarily visual and motor impairments, were taught how to code robots.

The camps were successful, but the touch points, as Howard called them, were relatively few.

“The touch points were just the kids I was able to recruit along with my clinical collaborator,” she said. “My touch point was: If I show up, I touched. If I didn’t, there was nothing going on. Whereas, in customer discovery, you weren’t necessarily speaking with the people you were impacting – the kids – but you were speaking with the teachers who interact with kids.”

“My workshop on a good day had maybe 10 kids,” she said. “I did these in a good year maybe twice. So, maybe like 20 kids in a year. You can’t possibly do what we’re doing now without Zyrobotics.”

'For students, (entrepreneurship) is a no-brainer'

“Students have always thought about the impact of what they’re doing,” she said. “Socially-responsible engineering. That’s always been the core mission. Being an entrepreneur has this aspect of knowing the exact problems you want to attack, versus maybe going into industry and working on someone else’s.”

It’s important, she said, that academics continue to have a place in the technological market. If left to major tech conglomerates, we up against group think and hesitating to take necessary risks.

“For students, it’s a no-brainer to engage in some entrepreneurial pursuit,” she said. “That mindset of thinking about problems and impacts allows you to view it differently.

“We need to be willing to make mistakes. The probability is that your startup will fail. But students understand that and still do it. We need to get rid of that fear of failure, or else we’ll never make significant change.”