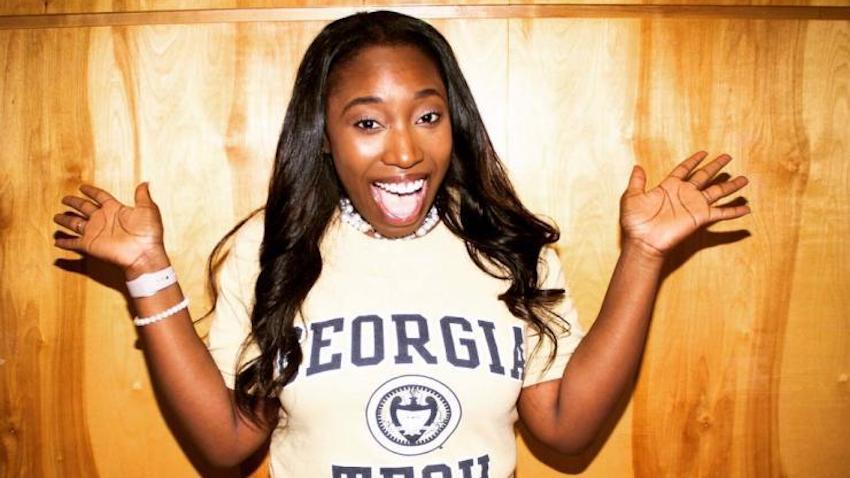 It’s an appropriate metaphor for Bryant, who began her career in computer science with no previous experience as an undergraduate student at the University of South Carolina. It also applies to all the other women in the field who, like Bryant, rely heavily on those who come before them and pass the torch to those who come after.

Unlike many robotic students, who have stories about being introduced through Lego Mindstorms that allow them to build and program their own Lego robots, the concepts of computer science and robotics were the furthest things from Bryant’s mind. They were completely foreign ideas that she had never given a second thought during her time in middle school and high school.

“That wasn’t me,” Byrant said.

Instead, she happened to take an Intro to Java class in her first year. There, she met her first collegiate mentor, Karina Liles. Liles was a graduate student who worked in a robotics lab and, after first semester, invited Bryant to come work with her as an undergraduate assistant. Bryant saw it as a part-time job and a place she could have her own desk. She wasn’t thinking about it as much more than that.

“I had no idea what her research was,” Bryant said. “I knew it was a robotics lab, so that was cool. And she was in education for low-resource communities. I came from a school that didn’t offer computer science at all, so I found that appealing.”

Once Bryant was introduced to the research process, asking and answering new questions, she was hooked. Collecting data, programming and testing robots then seeing children interact with them face-to-face.

“It made all the difference,” she said.

It was a start, but it was still a new world. Neither of her parents had earned four-year degrees, and her dad had passed away when she was in middle school. When she told her mom and grandmother that she was interested in computer science, she received some hesitancy back. But, while neither had experience in technology, they had raised her to be inquisitive and to seek out mentorship. That’s exactly what Bryant did.

Thrown into the deep end, she relied on Karina and a handful of other women she came across at South Carolina or conferences like Human Robot Interaction and Grace Hopper.

“I was drawn to women in the field, because the nurturing and the support from people who are also in an underrepresented group – whether it’s gender or race or whatever – they can talk to you about those specific challenges that you might come across,” Bryant said.

Eventually, that led her to Howard.

After her junior year in Columbia, Bryant applied to a program called Distributed Research Experiences for Undergrads (DREU). For minority undergraduate students, DREU matches students with mentors who have signed up to take on undergrads into their labs over the summer. Although students can be matched with anyone in the United States, Bryant’s mentor happened to be Howard.

“I was so excited,” said Bryant, who knew of Howard’s research through her own work at South Carolina. The work she was doing with social robots for kids with autism aligned with Howard’s, and it wasn’t uncommon for the Georgia Tech professor’s name to be cited in one of their papers. “There was a student matched with a mentor in Hawaii, and everyone thought that was the luckiest one. I was like, ‘No, I’m pretty sure I got the best deal.’”

Bryant worked on a project in Howard’s lab that summer with three other undergrads. Howard was immediately impressed with Bryant because of her unique programming ability.

“I remember needing someone to program the robot, and she was just like, ‘Oh, I can do it,’” Howard said. “She impressed me right away, and when it was time for her to choose a graduate program I knew she’d fit perfectly in our lab.”

Their work together now is impacting individuals with disabilities, making technology work for everybody including those with motor or visual or hearing impairments. They are investigating robot gendering and its impact on human trust, and work toward inclusivity with programs like AI4All.

Bryant is using the inspiration that Howard has provided to her and feels a responsibility to continue that for the next generation of women roboticists. She is humbled by people who now look up to her like she did to Howard, being left speechless by a young student who featured her for a school project on Black History Month.

When she goes to Grace Hopper, Bryant loves meeting the undergrads and passing on her advice about academics and the challenges women face in the field. She also watches to make sure they are asking questions or calls on those who look like they have a question, but are afraid to ask.

“I remember being that person in the room,” she said. “Women don’t just need representation, they need a voice. I want to be their champion, connect them to the right people.”

And her biggest advice to them might sound familiar.

“Just start,” she said. “You’ve got to start somewhere.”