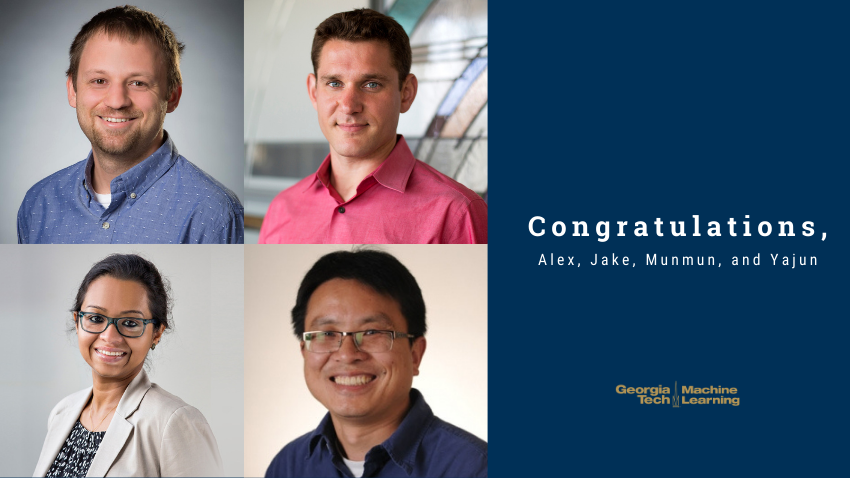 Four faculty members at the Machine Learning Center at Georgia Tech have received promotions or been granted tenure.

Jake Abernethy has been promoted to associate professor in the School of Computer Science and granted tenure. Abernethy’s research focus is machine learning, where he enjoys discovering connections between optimization, statistics, and economics.

In 2011, he completed his Ph.D. at the University of California, Berkeley before becoming a Simons postdoctoral fellow for the following two years. After the water crisis in Flint, Mich., Abernethy worked on detecting lead contamination and infrastructure remediation. Prior to studying and teaching machine learning, Abernethy performed comedy and juggling shows, opening for Sinbad and Dave Chappelle.

Munmun De Choudhury has been promoted to associate professor in the School of Interactive Computing and granted tenure. De Choudhury is also affiliated with the GVU Center and Institute for People and Technology (IPaT) and leads the Social Dynamics and Wellbeing Lab (SocWeb Lab.) De Choudhury studies problems at the intersection of computer science and social media, building computational methods and artefacts to help understand human behaviors and psychological states and how they manifest online.

Prior to joining Georgia Tech in 2014, De Choudhury was a postdoctoral researcher in the nexus group at Microsoft Research, Redmond. In 2011, she received her Ph.D. from Arizona State University, Tempe. After graduate school, De Choudhury spent time at Rutgers University and was a faculty associate with the Berkman Center for Internet and Society at Harvard University.

Mei received his Ph.D. in mathematics from the California Institute of Technology in 2003. He has also worked as a postdoc in biostatistics at the Fred Hutchinson Cancer Research Center. In 2010, Mei was awarded the National Science Foundation (NSF) CAREER Award and in 2008 was awarded Best Paper at FUSION. Mei was awarded the prestigious Abraham Wald Prize in Sequential Analysis in 2009.

Alex Endert has been promoted to associate professor and granted tenure in the School of Interactive Computing. Endert directs the Visual Analytics Lab where he and his students apply fundamental research to domains including text analysis, intelligence analysis, cybersecurity, and decision-making, and explore novel user interaction techniques for visual analytics.

Editors Note: Molei Tao has been promoted to associate professor with tenure in the School of Math. Tao is an applied and computational mathematician, designing algorithms for faster and more accurate computations and developing mathematical tools to analyze and design engineering systems or answer scientific questions.

He earned his Ph.D. in control and dynamical systems with a minor in physics from the California Institute of Technolgy where he also worked as a postdoctoral researcher. He is the 2011 recipient of the W.P. Carey Ph.D. Prize in Applied Mathematics and a 2019 NSF CAREER Award.