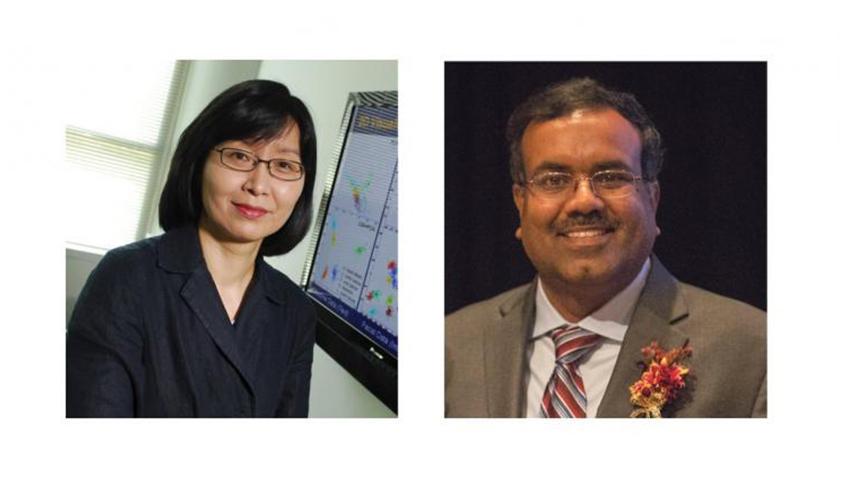 The Association for Computing Machinery (ACM) named School of Computational Science and Engineering (CSE) Chair and Regents' Professor, Haesun Park, and CSE Professor and Executive Director of the Institute for Data Engineering and Science, Srinivas Aluru, as two of 95 researchers accepted to its latest class of Fellows.

ACM is the preeminent and world's largest computing society and the title of ACM Fellow is one of life-long prestige.

Specifically, Park was awarded this recognition on behalf of her contributions to numerical algorithms, data analytics, and leadership in computational science and engineering. The latter of which includes her recent advancement to CSE chair, a title that realizes more than a decade of advocating for the field of CSE to be recognized as a stand-alone designation.

[Related News: Leading in the Lab and Beyond]

According to Park, “I am honored and humbled to become an ACM fellow. I thank all my students and collaborators who made it possible.”

Aluru is being recognized by ACM for research contributions to parallel methods in computational biology and leadership in data science. From sponsoring the annual ACM SIGBio Diversity and Inclusiveness Panel to leading initiatives to increase equity for underrepresented groups, Aluru’s years of work have made major contributions to enhancing the field of data science for all.

“I remember joining ACM as a student member in 1992, having little idea how important it is for professional growth and service,” said Aluru.

“Since 2015, I had the opportunity to lead computational biology activities of ACM as Chair of its Special Interest Group in Bioinformatics, Computational Biology, and Biomedical Informatics (SIGBio). It is delightful to have ACM formally recognize my research contributions in this area and leadership in data science,” he said.

What makes this all the more impressive is that this recognition marks the third major fellow title for both Park and Aluru who are also IEEE and Society for Industrial and Implied Mathematics Fellows.

“Furthermore, Srinivas is also a fellow of the American Association for Advancement of Science (AAAS) – an extremely impressive record! His record also represents the power of CSE as a foundation for many disciplines,” said Park.