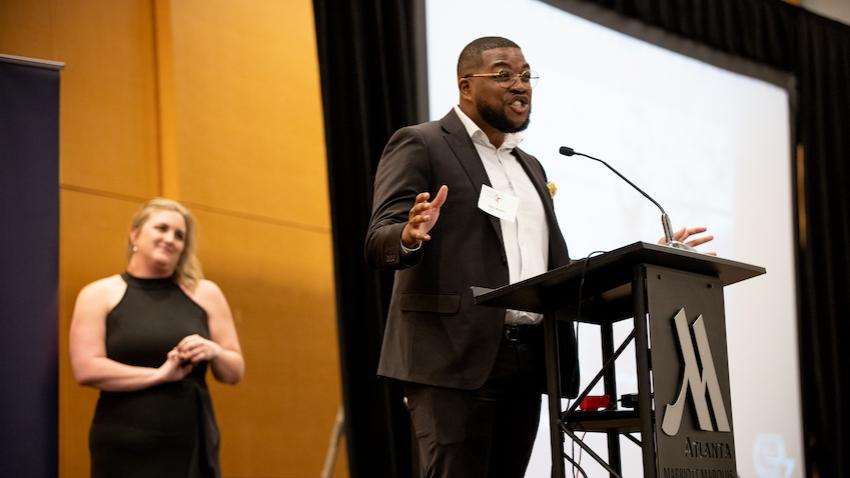 The College of Computing celebrated its Hall of Fame on Oct. 6, adding one new member and celebrating two recipients of the Rising Star Award.

The Hall of Fame seeks to recognize those alumni, faculty, and friends who have contributed significantly to the advancement and reputation of the College through the years. The College also seeks to honor the impact of our community members on the world of computing and computing education.

This year’s College of Computing Hall of Fame inductee is Youssef Khalidi, corporate vice president of Microsoft. Khalidi (M.S. 1985, Ph.D. 1989) is a member of the team that conceived and built Microsoft Azure, which is one of the biggest hyperscale public clouds in the world. He has served in several engineering, architectural, product management, and operational leadership roles with Azure over the years.

Prior to Microsoft, Khalidi was a distinguished engineer at Sun Microsystems, where he was CTO and chief architect of Solaris. He is a member of the President's Advisory Board and previously served on the College’s Advisory Board. He holds more than 50 patents in distributed systems, networking, and computer hardware.

Chu has more than a decade of experience as a roboticist and specializes in human-robot interaction. She has received top-tier industry honors including:

In addition to creating patient-care robots Moxi and Poli, Chu has used her expertise on robotic platforms including PR2, Meka Robot, and Kinova Jaco2.

Woumn (pictured above) works with Overflow, a startup that makes it easy for nonprofits to receive gifts of non-cash assets such as stock and cryptocurrency. Overflow serves and powers stock donations for more than 200 nonprofits such as the Golden State Warriors Community Foundation, StreetCode Academy, and Meals on Wheels San Francisco.

Prior to joining the founding team at Overflow, Woumn was a software engineer at Twilio on its messaging team. He was recognized as a 2022 Forbes 30 under 30 honoree in the social impact category. Additionally, Woumn was honored on the AFROTECH Future 50 list, which recognizes 50 rising titans in the tech industry.

The Hall of Fame ceremony also celebrated several previous inductees and award winners who had not been previously honored in-person due to Covid. You can learn more about all the the College's Hall of Fame and Rising Star members on our Hall of Fame page.