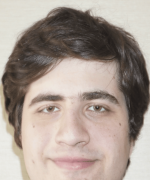 Daniel Genkin is an Alan and Anne Taetle Early Career Associate Professor
at the School of Cybersecurity and Privacy at Georgia Tech. Daniel’s research
interests are in hardware and system security, with a particular focus on
side channel attacks and defenses.

Daniel's work has won the Distinguished Paper Award at IEEE Security and Privacy,
several IEEE Micro Top Picks and Black Hat Pwnie Awards, as well as top-3 paper awards
in multiple conferences. Daniel has been part of the team performing the first
analysis of speculative and transient execution, resulting in the discovery of
Spectre, Meltdown, and followups. Daniel has a PhD in Computer Science from
Technion --- Israel's Institute of Technology.

School of Computer Science
School of Cybersecurity and Privacy