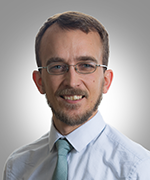 Toby Isaac is an Adjunct Professor in the School of Computational Science and Engineering.  He earned his B.A. in Computational and Applied Mathematics from Rice University in 2007 and his Ph.D. in Computational Science and Engineering from the University of Texas at Austin in 2015.  He is interested in the developing large-scale models of physical systems that can be used to make predictions from data. This work addresses the forward problem of solving the equations of those models by developing scalable and efficient data structures and numerical methods, as well as the inverse problem of inferring model parameters that match observations. With collaborators, he won the 2015 ACM Gordon Bell prize, and he has been honored with the 2016 SIAM/Supercomputing Early Career Prize. He is second author of the p4est library for scalable adaptive mesh refinement, and a leading contributor to PETSc, the Portable Toolkit for Scientific Computing.