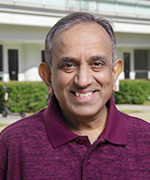 Professor Umakishore Ramachandran received his Ph. D. in Computer Science from the University of Wisconsin, Madison in 1986, and has been on the faculty of Georgia Tech since then. For two years (July 2003 to August 2005) he served as the Chair of the Core Computing Division within the College of Computing. His fields of interest include parallel and distributed systems, computer architecture, and operating systems.  He has authored over 100 technical papers and is best known for his work in Distributed Shared Memory (DSM) in the context of the Clouds operating system; and more recently for his work in stream-based distributed programming in the context of the Stampede system.  Currently, he is leading a project that deals with large-scale situation awareness using distributed camera networks and multi-modal sensing with applications to surveillance, connected vehicles, and transportation.  He led the definition of the curriculum and the implementation for an online MS program in Computer Science (OMSCS) using MOOC technology for the College of Computing, which is currently providing an opportunity for students to pursue a low-cost graduate education in computer science internationally.  He has so far graduated 28 Ph.D. students who are well placed in academia and industries. He is currently advising 5 Ph.D. students. He is the recipient of an NSF PYI Award in 1990, the Georgia Tech doctoral thesis advisor award in 1993, the College of Computing Outstanding Senior Research Faculty award in 1996, the College of Computing Dean's Award in 2003 and 2014, the  College of Computing William ``Gus'' Baird Teaching Award in 2004, the ``Peter A. Freeman Faculty Award" from the College of Computing in 2009 and in 2013, the Outstanding Faculty Mentor  Award from the College of Computing in 2014, and became an IEEE Fellow in 2014.