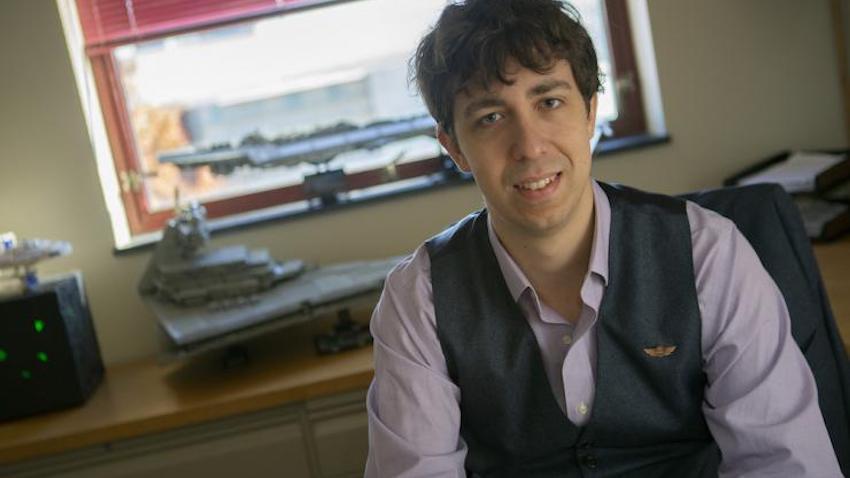 School of Interactive Computing Assistant Professor Matthew Gombolay was always interested in space and aviation. He had taken some flying lessons as a teen and after college decided that he wanted to finish his pilot certification. He had received some prodding from his then-girlfriend – now wife – in the form of a flight lesson in the Washington D.C. area.

Although he had done classes when he was around 15 or 16 years old, he treated it like it was a brand-new experience for him.

“It kind of was,” said Gombolay, who had backed out of his lessons when he was younger after being told he was ready to fly solo about eight hours in. “I got a little shy and embarrassed and quiet, but I always wanted to do it.”

And he did, receiving his certification after finishing his undergraduate degree. It was everything he had hoped. It was a different experience than his studies and his research, which is mostly an exercise of his mental capabilities. Flying required mental effort, but also physical – his hands, his feet, coordination of his body. It was something that he appreciated.

But it was also something that helped guide him on the path he wanted to follow for his research.

A lot of that was borne out of a specific experience he had during a flight lesson.

“I was flying the aircraft, and my instructor told me to plot a diversion to another airport because we were going to pretend that the airport I was headed to had some weather that would prevent me from landing,” he explained. “That’s a lot of work. You have to fly the plane, you have to get out a map and do all the segments you’ll take, measure the angles, measure distances, calculate fuel burn and figure out how you’ll change your flight plan.”

So, when given the directive to use autopilot while doing the calculations, Gombolay input his altitude and heading and stuck his head into his calculations.

It was a mistake.

“She told me I broke the first rule,” he said. “You have to aviate, navigate, then communicate. I was so desperate to handle the workload that I turned over the first duty to an autopilot and didn’t really know how it worked.

It was a realization of how quickly and easily humans are willing to trust automated systems that may not be entirely prepared to handle that workload. Your willingness to be vulnerable is a huge choice, he said.

“I can trust something, but that doesn’t make it trustworthy,” he said.

This realization helped guide him to human factors engineering during his graduate studies at the Massachusetts Institute of Technology, where he earned his Ph.D. in Autonomous Systems in 2017.

Since joining Georgia Tech in the beginning of the fall semester, Gombolay has been growing his lab and beginning a handful of new projects that build on some of his past research.

One recently-funded project done in collaboration with MIT focuses on how humans make decisions as part of a team – the strategies, the styles, etc. Using a video game as an example, he explained that some individuals may prefer an aggressive approach versus a defensive.

“These different stylistic things emerge naturally in how humans solve problems,” Gombolay said. “But that diversity isn’t very pleasant for machine learning algorithms because the average of two different people is not a third good person. It’s just an ugly mess.”

His lab is looking at ways to synthesize policies that can leverage all of the data about styles and strategies and tailor to individual differences. Health care is an example, Gombolay said. Consider a physical therapist who wants to teach a robot how to take care of a patient at home. Each therapist has his or her own unique style of stretching, massaging, and strength-training their patients, and each patient has a unique malady, response profile, or anatomy.

“Most algorithms today that would be put on a robot to help it learn how to care for a patient would either apply a one-size-fits-all model, which can result in a blend that helps nobody, or train from scratch for each new patient-therapist combination, which would take way too long to be a practical solution.

“We want to leverage every robot’s collective experience while still being able to tailor the behavior to each individual.”

Other areas of focus for his lab include manufacturing, health care, and new areas in reinforcement learning. He is currently funding three students, and his lab includes one research scientist.

When he’s not doing research – or maybe flying a plane – Gombolay is usually taking part in one of his other hobbies, like tennis or building models of Star Wars or Star Trek ships with his LEGOs and MegaBloks.

He’s also a musician, who started on the violin and piano before adding an alto saxophone to the mix and later a guitar. The guitar is his instrument of choice nowadays, and he’s spent a lot of time using it in bands in college – church, a cover band, talent shows and the like.

He’s found a couple of people on campus, like fellow IC Professor Seth Hutchinson, who don’t mind getting together for a jam session now and again.

As the Star Wars and Star Trek models might suggest, Gombolay has always been fascinated by space and space travel. It’s influenced his path in research and, who knows, in another life he might have been an astronaut.

“Maybe,” he said when asked whether that was ever an ambition. “Who knows? Maybe one day I’ll be on a rocket to Mars. I’ll take my wife and the kid with me. She’s a physician, so she’ll take care of us.”