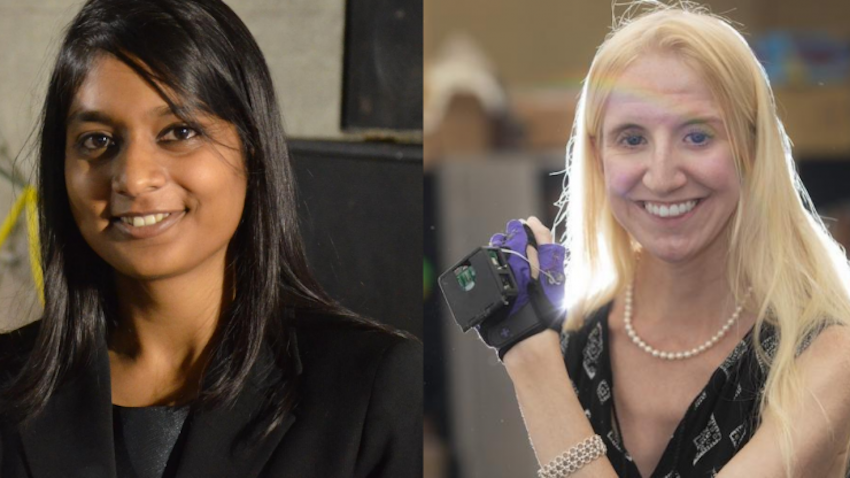 Recent Georgia Tech Ph.D. graduates Caitlyn Seim and Aishwarya Agrawal, both from the School of Interactive Computing, were awarded the 2020 Sigma Xi Best Ph.D. Thesis Award. They were two of just 10 Ph.D. students at Georgia Tech recognized with the honor.

Seim’s thesis, titled Wearable Vibrotactile Stimulation: How Passive Stimulation Can Train and Rehabilitate, presents a technique in which a vibrating wearable device is used to retrain motor function following debilitating occurrences of spinal fracture or stroke. Now a postdoc at Stanford University and a fellow with the National Institutes of Health, Seim is currently working with stroke survivors to develop accessible and functional wearable devices to reduce physical disability in both the upper and lower limbs.

“Lately, I have also developed new mechanical tools to assess hand and arm function when there are no quantitative clinical tests available,” Seim said. “I plan to continue research on wearable and ubiquitous systems for health, accessibility, and training.”

In Agrawal’s thesis, titled Visual Question Answering and Beyond, she explores a multi-modal artificial intelligence task called visual question answering. In this task, given an image and natural language question about it, a machine is programmed to automatically produce an accurate natural language answer. The applications of VQA include aiding visually impaired users in understanding their surroundings, aiding analysts in examining large quantities of surveillance data, teaching children through interactive demos, interacting with personal AI assistants, and making visual social media content more accessible.

Now at DeepMind and soon to be an assistant professor at the University of Montreal and Mila, an AI research institute, Agrawal intends to equip current VQA systems with better skills to move toward artificial general intelligence.

“In the long term, I am excited about science fiction becoming reality, when we all have smart virtual assistants that can see and talk and serve as an aid to visually impaired users,” she said.