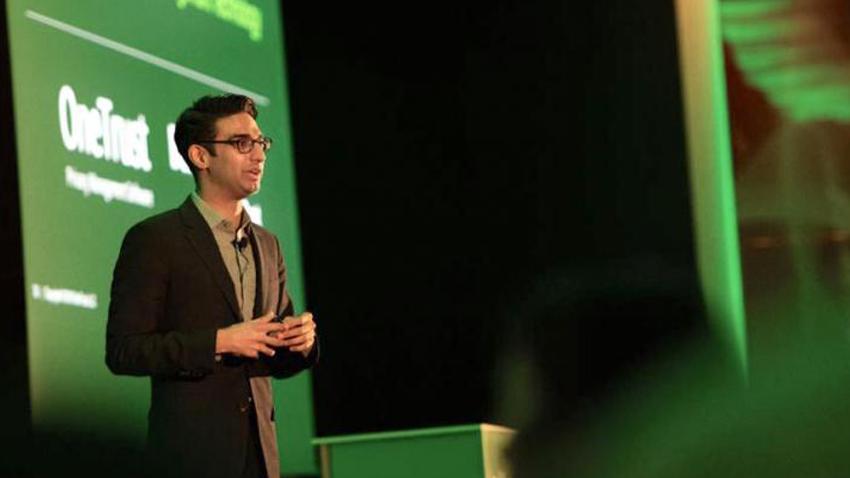 From Restaurateur to Tech Entrepreneur: Alum Tells Why the Shift Was Worth the Risk

Kabir Barday (BS CS 2009) always knew he wanted to own a business – his family owns restaurants and convenience stores, and he planned to follow in their footsteps.

“I had a pizza franchise all picked out,” he said.

After graduating from Georgia Tech with his computer science degree, Barday took a job at AirWatch, an enterprise mobile security startup eventually acquired by VMware. His plan was to save money to start his restaurant empire, but his computing work led him in a different direction.

“It’s riskier to be a real tech entrepreneur,” Barday said. “I never thought I would solve such a big problem.”

That big problem is data privacy and the hundreds of laws that govern it. Barday’s company, OneTrust, provides a privacy, security, and third-party risk technology platform to more than 3,000 companies. In July, OneTrust raised $200 million in a fundraising round that valued the company at $1.3 billion.

Although he didn’t intend to be a tech entrepreneur when he arrived on campus, Barday says that his Georgia Tech experience has been key to his success.

“Once you’re part of Georgia Tech, there are so many different paths you can take,” he said.

Barday took advantage of multiple options for learning about business while he was an undergraduate. He got a certificate in entrepreneurship from the Institute.

“I still use some of the courses in that curriculum, like finance and accounting,” he said.

Barday named two key faculty mentors. The first, Distinguished Professor Merrick Furst, the director of the Center for Deliberate Innovation and an expert in commercialization and new venture creation.

“Learning about those philosophies and methodologies was really helpful,” Barday said.

The other mentor was School of Computer Science Professor Ellen Zegura, who oversaw Barday’s capstone project.

“I helped build a laboratory information management system for remote facilities in Africa,” he said. “In other words, I got experience solving real-world problems.”

The final key in Barday’s entrepreneurial education was his experience in the tech ecosystem of Atlanta. He joined TiE Atlanta, a local networking group for entrepreneurs, and attended their monthly meetings.

“I met so many people in the city who were doing great things and who really mentored me,” he said. “I would absolutely encourage students to take advantage of these resources.”

Barday and OneTrust have always hired a lot of Georgia Tech alumni — they are located in Atlanta, and of course, Barday knows first-hand the rigorous education our alumni have received.

Some of those alumni have been so good that they actually changed Barday’s hiring practices.

“I had a formula in my mind for what made a good job candidate,” he said. “Engineering degree, good GPA, lots of extracurriculars. Then I had a couple of candidates sneak through my process.” The candidates in question were Tech alumni, but with low GPAs.

“They were rock stars,” he said. “Some of the best I’ve ever hired.” He realized that a lot of non-academic factors can affect GPA – a family tragedy, for example, or even a change of major.

“Having that Georgia Tech background is a strong statement that kind of supersedes those problems,” he said.