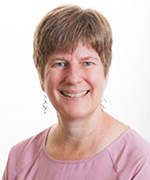 Ellen W. Zegura is the Fleming Chair and Professor in the School of Computer Science at Georgia Tech. She received the BS in Computer Science, the BS in Electrical Engineering, the MS in Computer Science and the DSc in Computer Science, all from Washington University in St. Louis, Missouri. Since 1993 she has been on the faculty of the College of Computing at Georgia Tech where she conducts research and teaches in computer networking and computing for development. In 2008, she helped create the Computing for Good initiative in the College of Computing, a project-based teaching and research activity that focuses on the use of computing to solve pressing societal problems.  She is a Fellow of the IEEE, a Fellow of the ACM, and an elected member of the Computing Research Association Board (CRA). Since Fall 2014 she has been on the Executive Board of the CRA. She served on the NSF CISE Advisory Committee from 2005-2009.