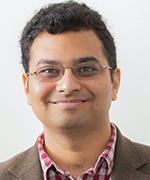 B. Aditya Prakash is an Associate Professor in the College of Computing at the Georgia Institute of Technology (“Georgia Tech”). He received a Ph.D. from the Computer Science Department at Carnegie Mellon University in 2012, and a B.Tech (in CS) from the Indian Institute of Technology (IIT) -- Bombay in 2007. He has published one book, more than 80 papers in major venues, holds two U.S. patents and has given several tutorials at leading conferences. His work has also received multiple best-paper/best-of-conference selections and travel awards. His research interests include Data Science, Machine Learning and AI, with emphasis on big-data problems in large real-world networks and time-series, with applications to epidemiology, health, urban computing, security and the Web. His work has been supported by the National Science Foundation (NSF), the Centers for Disease Control (CDC), the Department of Energy (DoE), the National Security Agency (NSA), the National Endowment for Humanities (NEH) and various companies. Tools developed by his group have been in use in many places including ORNL, the CDC, Walmart and Facebook. He received a Facebook Faculty Award in 2015, was named as one of ‘AI Ten to Watch’ 2017 by IEEE, and received the NSF CAREER award in 2018. His work has also been highlighted by many media outlets and popular press. He was previously on the faculty of Computer Science at Virginia Tech. He is a member of the infectious diseases modeling MIDAS network and core-faculty at the Center for Machine Learning (ML@GT) and the Institute for Data Engineering and Science (IDEaS) at Georgia Tech. Aditya’s Twitter handle is @badityap.