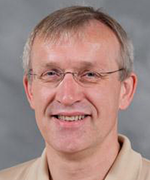 Henrik I. Christensen is the KUKA Chair of Robotics in the School of Interactive Computing and executive director of the Institute for Robotics & Intelligent Machines.

Christensen received his first degree in mechanical engineering and subsequently received M.Sc. and Ph.D. degrees from Aalborg University in Denmark. His research focuses on human centered robotics, specifically perception, human-robot interaction, and systems modeling. A large number of companies have commercialized his research and he has maintained active collaborations with researchers and companies across three continents. Christensen also serves as an advisor to numerous companies and agencies across the world.

The author of more than 300 contributions in the areas of computer vision, artificial intelligence, and computer vision, Christensen held positions at Aalborg University, Royal Institute of Technology, and the University of Pennsylvania before joining the Georgia Tech faculty.

Additionally, Christensen was the founder of the European Network of Excellence in Robotics (1999-2006), and in 2011, he founded the U.S. Robotics Virtual Organization. He was the coordinator of the effort to formulate a National Robotics roadmap, which was presented to congress in 2009 and 2013.

Christensen serves on seven editorial boards across the areas of computer vision and robotics. He is the editor in chief of Robotics and Trends in Robotics and serves as the senior technology lead for the Robotics Technology Consortium (RTC). He is also a member on the boards of the Robot Industry Association (RIA) and the College Industry Council for Material Handling Industry Education (CICHME).