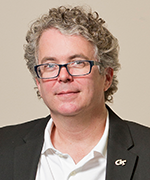 Professor and Director of GVU

Dr. W. Keith Edwards is a Professor in the College of Computing at Georgia Tech and Director of the GVU Center. His research interests focus primarily on driving human-centered concerns into core computing infrastructure. For example, he is a pioneer in the exploration of human-centered perspectives on computer networking, particularly in the home; he has also been active in developing more usable approaches to information security systems. Lately, his research has expanded into a number of explorations of the social impacts of computing technology, and understanding how technology can support the work of non-profits and NGOs. While he is a technologist at heart, he enjoys working with designers, as well as ethnographers and other social scientists.

An ACM Distinguished Scientist, Dr. Edwards has published over 80 scientific articles in major journals, conferences, and books, as well as two books on Sun's Jini distributed computing technology. An active inventor, he is the author of nearly four dozen U.S. and International patents either granted or pending. His research has been widely funded by both industry and governmental sources, including Cisco, Intel, Microsoft, Samsung, Google, Symantec, Steelcase, Nokia, Dell, NSF, and NIST.

Prior to his current appointment at Georgia Tech, Dr. Edwards was a Principal Scientist at Xerox PARC (Palo Alto Research Center), where he worked for nearly ten years. During his time there he worked in PARC's Distributed Systems group on distributed information systems and weakly-consistent distributed databases; he later managed PARC's Ubiquitous Computing group, created and led the development of the Speakeasy framework for ubiquitous computing, and made key contributions to PARC's technology commercialization and licensing activities.