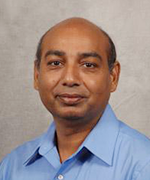 Dr. Mustaque Ahamad is a professor in the School of Computer Science. He has served on the faculty at the Georgia Institute of Technology since 1985.  Dr. Ahamad was director of the Georgia Tech Information Security Center (GTISC) from 2004 to 2012. As director of GTISC, he helped develop several major research thrusts in areas that include security of converged communication networks, identity and access management, and security of healthcare information technology.  Currently, he leads Georgia Tech’s educational programs in cyber security as associate director of its Institute for Information Security and Privacy. His research interests span distributed systems, computer security and dependable systems. Dr. Ahamad co-founded Pindrop Security and FraudScope and serves as chief scientist of these companies. He received his Ph.D. in computer science from the State University of New York at Stony Brook in 1985. He received his undergraduate degree in electrical and electronics engineering from the Birla Institute of Technology and Science, Pilani, India.