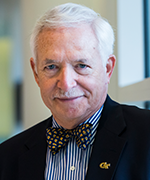 Peter A. Freeman was the Founding Dean of the College of Computing in 1990 and served as the John P. Imlay Dean of Computing until 2002.   From 2002 to 2007, he was Assistant Director of the National Science Foundation (NSF), heading the Computer & Information Science & Engineering Directorate.  He previously held positions at George Mason University, NSF, the University of California, Irvine, and Carnegie-Mellon.

Dr. Freeman is widely recognized for his technical and educational activities in software systems and software engineering, and computer science and information technology more generally. In addition to his academic and research activities, he is an experienced university and government executive and manager, and a seasoned lecturer and consultant to corporations, governments, and universities in more than a dozen countries.

At Georgia Tech, he led a group of about thirty faculty, annual research of less than $2M, and a few hundred students to a dynamic group of sixty-five faculty, annual research well in excess of $10M, and almost 2000 students. Several of the research groups in the College became acknowledged national leaders in fields ranging from theory to HCI. The foundation created under his leadership has permitted the College of Computing to become a top-ten ranked unit with outstanding education and research innovation and disciplinary leadership.

As an Assistant Director of NSF he was part of the senior management team that helped formulate national science policy and that operated the NSF. As AD/CISE, he oversaw a staff of approximately 100 and a funding budget of over $500M/year. He was also responsible for insuring that the U.S. computing research community was well connected internationally. During his time as AD/CISE, Dr. Freeman was responsible for a number of activities that continue to have a major impact on computing, including the Information Technology Research Program, cyberinfrastructure initiatives, the GENI Internet Research project, Broadening Participation in Computing, and the Computing Community Consortium.

He has focused his attention for over twenty-five years on national policy and local action intended to advance science and engineering research and education.  For almost forty years, he has been active internationally –– teaching, lecturing, and consulting domestically and overseas. He began his research career fifty years ago and held his first computing job in 1961.

Dr. Freeman is a Fellow of ACM, IEEE, and AAAS. He received his Ph.D. in computer science from Carnegie-Mellon University (1970), his M.A. in mathematics and psychology from University of Texas at Austin (1965), and his B.A. in physics and mathematics from Rice University (1963).

He is a resident of Washington, DC.