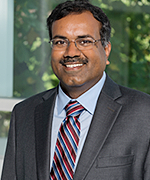 Executive Director, Institute for Data Engineering and Science and Professor

Srinivas Aluru is a professor in the School of Computational Science and Engineering within the College of Computing at Georgia Institute of Technology. He conducts research in high performance computing, bioinformatics and systems biology, combinatorial scientific computing, and applied algorithms. He pioneered the development of parallel methods in computational biology, and contributed to the assembly and analysis of complex plant genomes. His group is currently focused on developing bioinformatics methods for high-throughput DNA sequencing, particularly error correction and genome assembly. In systems biology, his group is working on network inference methods using mutual information and Bayesian approaches, and network analysis techniques to further the knowledge of partially characterized pathways. His contributions in scientific computing lie in parallel Fast Multipole Method, domain decomposition methods, spatial data structures, and applications in computational electromagnetics and materials informatics. Aluru is a Fellow of the American Association for the Advancement of Science (AAAS) and the Institute for Electrical and Electronic Engineers (IEEE). He is a recipient of the NSF Career award (1997), IBM faculty award (2002), and Swarnajayanti fellowship from the Government of India (2007). He serves on the editorial boards of the IEEE Transactions on Parallel and Distributed Systems, the Journal of Parallel and Distributed Computing, and the International Journal of Data Mining and Bioinformatics