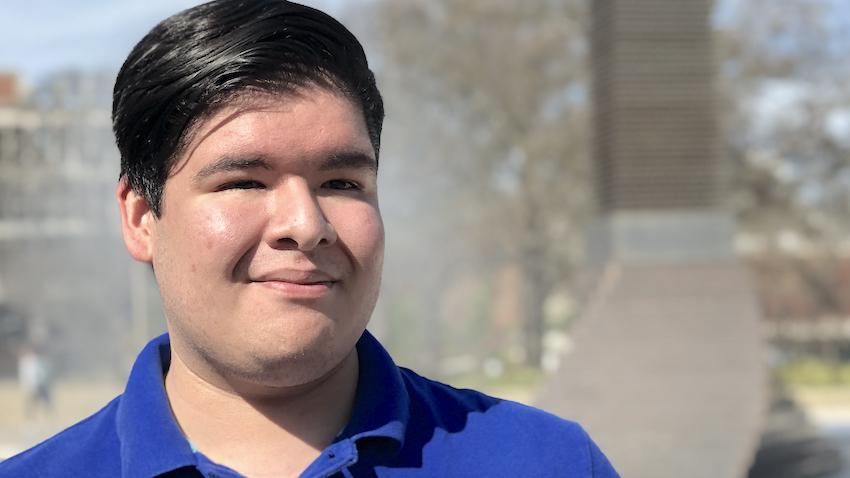 Ruben Rivadeneira is studying human-computer interaction and pursuing a master's degree through the College's B.S./M.S. program in Computer Science. Prior to completing his undergraduate work last year, Rivadeneira shared some of his thoughts about the importance of Hispanic Heritage Month and how he defines success.

Where is your family from originally?

My family is originally from Ecuador, but we moved to the United States when I was five and have lived here ever since.

Why is it important to celebrate Hispanic Heritage Month?

Our country is built off the hard work and sacrifice of many different groups of people that have contributed to making the United States what it is today. Despite the fact there is still much work to be done, I see Hispanic Heritage Month as a way to honor this hard work and sacrifice of the Latin American community throughout the years by celebrating our cultures and diversity. Even among our community, we have a level of diversity and vast, rich cultures that I would love to expose others to. The celebration of Hispanic Heritage Month is the perfect opportunity to do just that!

What advice do you have for high school students considering CS?

It would definitely be to ask for help when you need it because you don’t have to struggle alone. Here at Georgia Tech, I’ve been pushed to my limits and I was really bad at asking for help when I needed it. I realized this mentality of “I can do it alone; I don’t want to bother others with my problems” was not sustainable and I slowly started going to the TA help desks and studying with classmates. I ended up meeting some of my best friends as a result and realized that we’re all struggling, but at the end of the day, we’re struggling together and pulling through.

Beyond money, awards, and job titles, what’s the biggest measure of success?

I think having a strong network is just as valuable, if not more valuable than money, awards, and job titles, because I’ve come to realize that who you know is priceless. Simply building rapport with the people you meet has allowed me to grow on a personal and professional level while opening up new opportunities that I would have otherwise dreamed of having. In times of need, my network has helped me get back on track to becoming the person I dream of being, not the person that I had settled for becoming during the pandemic, and I am forever grateful to them for that.

What’s the next big thing you’d like to accomplish?

I haven’t thought too far out into the future, but I know the next big accomplishment I want to achieve is going to be graduating with my master’s degree from Georgia Tech and going into industry, at least for a couple of years. Along the way, things could change and other opportunities might appear, but I’m just excited to see where life takes me after graduation.