The Debate that Changed Programming: A Living History of Computing’s Famous Collaboration 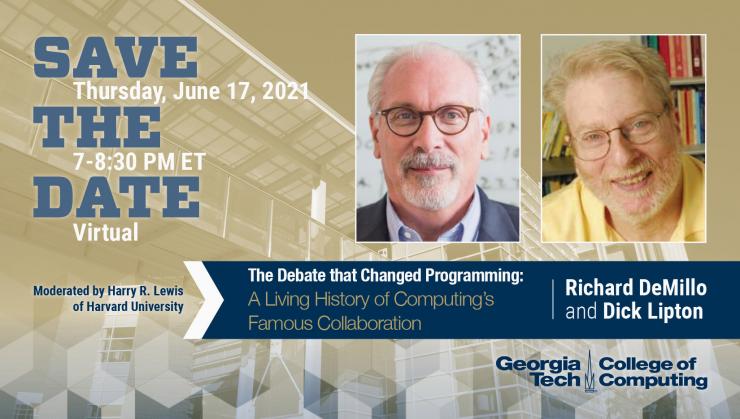 A quarter century into the modern era of computing, two young assistant professors joined forces with the legendary Alan Perlis, one of the founding fathers of American computer science, and would publish a paper challenging the conventional wisdom that computer programming should be formal and mathematical. It was a shot across the bow to Edsgar Dijkstra, Tony Hoare and many others who sought the certainty of mathematical proofs of software correctness. The paper would become a lightning rod for a debate that would continue for the better part of four decades. It moved federal funding patterns and was the backdrop for dramatic showdowns between formalists and pragmatists.

Twenty years later, those same assistant professors ended up in the College of Computing at Georgia Tech to continue their lifelong collaboration. One of them, W. Storey Professor of Computing Richard “Dick” Lipton was the first Georgia Tech computer scientist elected to the National Academy of Engineering. The other was Richard “Rich” DeMillo, who left his position as Chief Technology Officer at Hewlett-Packard to become the John P. Imlay Jr. Dean of Computing.

Their seminal 1979 work, “Social Processes and Proofs of Theorems and Programs,” is now part of a new collection of 46 classic papers in computer science published as a book this year from the MIT Press. Ideas That Created the Future by Harvard Professor Harry Lewis spans the intellectual birth and growth of the field – from Leibnitz and Boole to Knuth and RSA – and covers the sweeping discoveries and advancements that have come to define computer science. As Lewis points out in his introductory essay, “The fact that some computer scientists still bristle when this paper is mentioned is testament to its dialectic force.”

The College of Computing at Georgia Tech invites you to take part in a historical conversation between Rich DeMillo and Dick Lipton, two pioneers in computer science who helped shape a field that has come to reshape how we live every day.

Join the virtual fireside chat, Thursday, June 17, 2021, at 7 PM ET, for this living history – as told by the men who lived it – and hear about the experiences and their roles in this turning point in computer science.